Aspergillus oryzae the secret of Koji

Think of special Sake koji starters, Shochu koji starters, Miso koji starters, Soy sauce koji starters actually too much to mention. If you find it interesting, you can find more information about the many species out there. All these different fungi are used for the production of traditional Japanese and Chinese beverages and fermented foods.

A fermentation cabinet can be used for many more things than for fermenting only Koji. The cabinet could be used for regular fermentation’s. You can ripen cheese in it, let alcohol ferment in it, tempé (Tempeh) in it. Grow mushrooms in and just keep going. The next project that is going to try is to make natto, if it worked out well then I’ll write a bit about it.

Making a fermentation cabinet (space) sounds a lot more complicated than it is. You can already make a fermentation room by making a hole in a tempex box and adding a heating element and a humidifier. However, you will need two more meters e.g. an inkbird to control the place.

Example of a fermentation space tempexbox 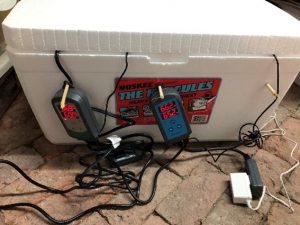 Otherwise, tap in some search terms on googling or on youtube and you’ll find a lot of stuff. From a hot water bath with pump to converted fridges, beverage containers, themoboxes can make it as crazy as you’d like.

Aspergillus oryzae the secret of Koji

Aspergillus oryzae you only have to buy once. If you use the fungus to make Koji you can choose to go beyond the white mold that sits on the product. If you allow the fungus to grow further, you will get to the point that the white fungus is slowly starting to turn brown-green. This is the moment when the fungus itself begins to form spores. The Koji now smells like fresh meat (tastes like dried raisins). If you were to go through it with your hand, there would be clouds of tracks over the Koji.

It’s not really hard to grow yourself, but it’s fun to do. So you always have traces to try some new experiments. If you want to grow the tracks myself I made a movie  for you in which you can see how I do.

I still don’t know whether this is dangerous or not! There’s not much left in Noma’s handbook of fermentation. If you search youtube then no one is talking about the danger it would bring. If I look in Jeremy Umansky’s book (also nice on instagram) it seems to be dangerous because you could breathe the tracks! There is even a name for that disease (Aspergillosis).

If I want to have new tracks and start harvesting, I’ll wear a mask just in case. Everybody’s got it these days. It may be that over time the tracks will lose some strength. I’ve been working with the same tracks for two years now and haven’t had any problems with it. If the tracks work less, add more tracks during whatever you’re going to make.

The spores can be dried at a temperature of about 45-50 c and stored in an airtight pot (years). If necessary, you can also vacuum the spores and store them in the freezer.

Cooking together, the ideal company outing

Kamado Joe Grill Dome and the Big Green Egg: what are the differences

Cooking with apps makes it a lot easier

Take a Challenge to Learn How to Make the Delicious Chocolate in Our Workshop!

Mehdi Gholam
08:12 10 Nov 22
We had an excellent afternoon with your help, thanks for the great experience. Highly recommended.