Cambodia borders the Gulf of Thailand in the south. The Mekong River flows through the country and in the Northwest of the country lies the Tonlé sap, a giant freshwater lake. In addition, the country, with the most wetlands in Asia, is the country with the most ‘wetlands’. It is therefore not surprising that Cambodian cuisine is known for freshwater and saltwater fish and that rice is a part of every meal. 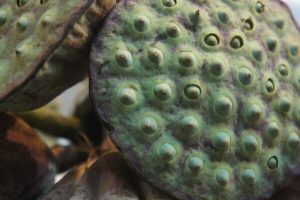 Besides rice and fish, however, there is much more that Cambodia’s cuisine is known for. Fermented sauces, pickled vegetables and pepper are the main seasonings. Unlike other countries in Southeast Asia, chile is used much less.

Due to the fertility of the country, Cambodian cuisine has so many ingredients that there are not a few dishes to be considered the most popular. A few well-known dishes are:

Amok
Contrary to what the saying ‘Amok’ suggests, this is a delicious dish. In banana leaves a curry is steamed with fish and rice. A classic and very popular in Cambodia.

Noodle soup
In the kitchen of Cambodia, a noodle soup is eaten for many meals. Often prepared with fish, but sometimes also with chicken, beef or pig. By varying with vegetables and herbs you can easily create dozens of varieties of noodles.

Dishes with kampot
Kampot is a peppercorn from Cambodia. Because Cambodia used to be a French colony, the pepper was used for years in the haute cuisine of France. Kampot is the reason that the chili peppers have not become as popular in Cambodia as in surrounding countries. Is there a need for sharper food? Then the kampot peppers are just brought in.

Cambodia is a fertile country and has the ideal climate for many fruits. What is popular in Cambodia is fruit, and is widely used in the kitchen. Not only for dessert, but also loose with many different dishes, such as salted fish. In addition to pineapples, mangoes, coconuts, lychees, papayas, bananas, melons and apples, Cambodia also has more exotic fruits. How about pitaya, mangistan or cashew fruit?

Do you want to know more about Cambodian food or prepare your own delicious meal? Come and have a look at our Cambodian cooking workshop! Under the guidance of our top chefs, you will make, eat and drink the most delicious dishes in 3 hours and learn to cook Cambodian!

Cooking together, the ideal company outing

What is ritual slaughter and why does this happen

There are plenty of alternatives to a vegetarian BBQ

What is Streetfood and how do I make it?